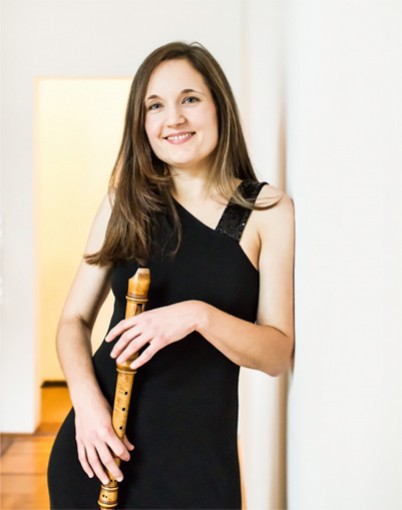 »With weightless virtuosity and touching timbre.«

The recorder player Kerstin Fahr has worked with many world-renowned early music ensembles including the Berliner Barock Solisten, Concerto Melante (Berlin), the Freiburg Baroque Orchestra, La Stagione Frankfurt or the Neumeyer-Consort. She is a member of the ensemble Teatro del mondo (direction: Andreas Küppers) and the ensemble Chayenne (music and contemporary dance).

Kerstin has performed at music festivals across Europe including the Lucerne Festival, the Bachfest Leipzig, Festival d’Ambronay, Grandezze & Meraviglie in Modena or Telemann Festtage Magdeburg.

With the Berliner Barock Solisten she has performed at the Vienna Musikverein, the Philharmonie Berlin, the Elbphilharmonie Hamburg or the Opéra Royal in Versailles. Kerstin’s projects also include opera productions by the Aalto theatre Essen, the Opera Frankfurt, the theatres in Darmstadt, Mainz and Gießen, as well as engagements at the historic Ekhof theatre in Gotha and the HR-Sinfonieorchester.

She takes part in recordings for the Cpo, Sony Classical, Christopherus, SWR, HR, SR and Deutschlandfunk. A recording of the Ouverture a-minor for recorder and strings by Telemann together with the Neumeyer Consort and Felix Koch appeared in 2017 as well as the recording of the Brandenburg Concertos with the Berliner Barock Solisten and Reinhard Goebel. A first recording of the Concerto grosso per flauto from the Harrach manuscript can be heard on the Napoli Galante CD together with the ensemble Teatro del mondo and Andreas Küppers.

Kerstin was born in Schwäbisch Hall in Germany. She studied the recorder at the conservatoires of Freiburg, Frankfurt and Lyon with Agnes Dorwarth, Michael Form, Michael Scheider and Pierre Hamon. In addition she studied the baroque violin with Petra Müllejans, Gottfried von der Goltz and Swantje Hoffmann. She was the recipient of a scholarship from the Yehudi Menuhin Foundation Live Music Now. Kerstin was awarded 1st prize in ErtaItalia competition in Padua in 2010 as well as the 3rd prize at the Moeck SRP competition in London in 2011. In 2012 she completed a postgraduate performance degree (Solistenexamen) at the Musikhochschule in Frankfurt.

Just as important for Kerstin as her artistic practise is teaching, towhich she also dedicates herself with great enthusiasm. She taught at the Dr.Hoch's Konservatorium Frankfurt and the Musikschule Wehrheim.
Since 2015 she teaches the recorder and methodology at the Hochschule für Musikund Darstellende Kunst Frankfurt am Main and held a substitute professorship there in the summer semester 2019.
Since September 2019 she also teaches recorder at the Conservatoire de Lausanne.